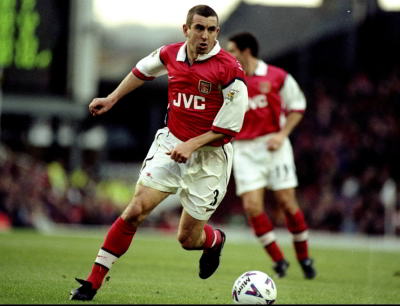 Nigel Winterburn (born 11 December 1963) is an English former professional footballer and current football television pundit who played as a left back from 1981 to 2003. He is best known for his role alongside the likes of Tony Adams, Steve Bould, Martin Keown and Lee Dixon, forming a celebrated defensive line for Arsenal in the Premier League and European football during the 1990s.

He also played in the Premier League for West Ham United and in the Football League for Wimbledon. He also earned two caps for England between 1989 and 1993.

Winterburn’s full debut for England came on 15 November 1989 against Italy. He made his second and final appearance for the senior national side nearly four years later on 19 June 1993 against Germany. The regular England left-back at this stage was Stuart Pearce.

On 14 July 2008, Winterburn joined Paul Ince’s backroom staff at Blackburn Rovers as defensive coach. Following the dismissal of Ince in December 2008, Winterburn was deemed surplus to requirements at Ewood Park. New manager Sam Allardyce stated, “I spoke to Nigel Winterburn today to say that, from my point of view, in terms of specialist defensive coaching, I think I can look after that area myself now.”