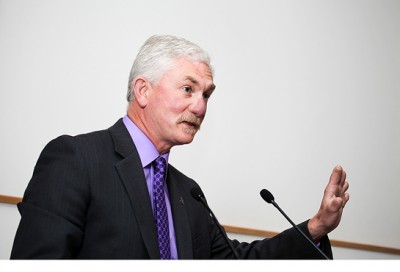 Nigel Vardy (born 22 April 1969 in Queen Mary Maternity Home in Derby) is an English mountaineer, motivational and leadership speaker, and the author of the books Once Bitten and Seven Peaks – Seven Islands. He suffered severe frostbite on Mt. McKinley in Alaska in May 1999 and his injuries led to the amputation of his toes, fingers and nose. He also required reconstructive facial surgery. His helicopter rescue from over 19,000 feet (5,800 m) was stated as the highest in North American history at the time. Months of recovery followed his accident, but he has returned to climbing and explored mountains across the world.

Vardy was brought up and educated Belper, Derbyshire, where he completed his O-levels at the local comprehensive school. He was always interested in the outdoors and spent many years walking with his family in the Derbyshire Peak District. At 16 he successfully applied for an apprenticeship with the East Midlands Electricity Board and began his career in engineering. He then studied in Nottingham before qualifying as an electrical engineer.

Vardy was introduced to Operation Raleigh by his training manager, and (now) great friend Bob Forbes. He passed selection in 1992 and left for Chile in January 1994. The next three month changed Vardy’s’ life forever. The exposure to expeditions struck a chord in his life and he has travelled extensively around the world since.

His early adventures were mainly tropical based, with visits to Malaysia, Indonesia, Burma, and Guyana. At home in the UK he climbed on summer rock and winter ice, honing his skills in the hills of Glencoe, Torridon and Skye in Scotland.
In 1998 he departed for Bolivia where he successfully summited Huyana Potosi and Illimani.

During mid-1998, Vardy met his Operation Raleigh friend Antony Hollinshead at a dinner party in Skipton. Here the first thoughts of climbing Mt. McKinley were born. He later met expedition leader Steve Ball and during late 1998/early 1999 they trained extensively together.

The team departed the UK during April 1999 with the intention of climbing the mountain via the West Rib. All went well until the summit day when severe weather conditions trapped them on the football field. Winds have been estimated at 60 mph with a windchill of –60°C. The team were forced to spend the night sheltering in a crevasse where Ball suffered severe hypothermia. The next morning the team attempted to retreat to their tents at 17,500 feet (5,300 m), but Vardy was suffering from severe frostbite and struggled to walk. Ball left the Vardy and Hollinshead in what Vardy describes as “the bravest decision I’ve ever seen taken in my life” to get help from other climbers. Vardy and Hollinshead were airlifted from the mountain a few hours later under the impression that Ball had found help. He had actually fallen badly on his rescue attempt and was severely injured, only being rescued himself 24 hours later.

Vardy’s injuries were severe and his toes, heels, fingers and nose turned black with frostbite. Initial treatment was at the Providence Medical Centre in Anchorage, before he was flown home for final surgery and recovery at Nottingham City Hospital.

Vardy had to learn to walk and use his hands again. Though his injuries were severe, he was determined to climb again.

Sixteen months after suffering his injuries, Vardy returned to climbing on rock in his native Derbyshire, before he took to ice again in Torridon during the winter of 2001. He found that his numerous skin-grafts suffered badly the abrasions of climbing, but he was determined and has climbed continuously to this day. He uses ice axes that have been adapted to fit his stumped fingers and now prefers winter climbing to summer.

Since 2001 he has climbed in the Alps, Dolomites, Nepali and Indian Himalayas, The Caucasus, South Africa and Brazil.