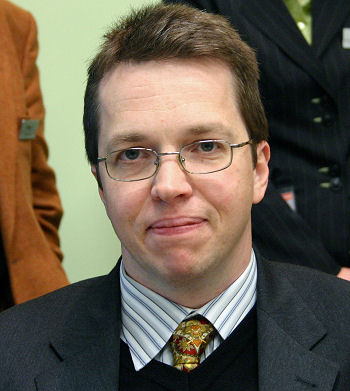 Nigel David Short MBE (born 1 June 1965) is an English chess grandmaster, chess columnist, chess coach and chess commentator. Short earned the Grandmaster title at the age of 19, and was ranked third in the world by FIDE from January 1988 to July 1989. In 1993 he became the first English player to play a World Chess Championship match, when he qualified to play Garry Kasparov in the World Chess Championship 1993 in London (Kasparov won, 12.5 to 7.5). As of August 2016, he is the oldest player ranked among the FIDE’s top 100 players and is currently ranked #77.

Short’s assaults on the World Chess Championship title began in earnest in 1985 when he narrowly qualified from the Biel Interzonal to become Britain’s first-ever candidate. He needed a playoff to advance past John van der Wiel and Eugenio Torre for the last berth, after the three had tied in regulation play. But the Montpellier Candidates Tournament brought Short little success, as he scored 7/15 to finish in 10th place. In the next cycle, he again qualified by winning the 1987 Subotica Interzonal with Jon Speelman. The Candidates stage had by this time reverted to its traditional match format: Short defeated Gyula Sax (+2=3) in Saint John, Canada, in 1988, but then unexpectedly lost (−2=3) to Speelman in London.

Short’s next attempt proved his most successful. He defeated Mikhail Gurevich in the last round of the Manila Interzonal and finished equal third with Viswanathan Anand, behind Vassily Ivanchuk and Boris Gelfand, qualifying him as a Candidate for the third successive time. Defeating Gelfand (+4−2=2) in the 8/Final, he progressed to meet Speelman again in the quarters. This struggle went into extra time, and the younger man eventually prevailed. In the semifinal, in 1992, the Englishman overcame former World Champion Anatoly Karpov (+4−2=4) in a match that was described as “the end of an era”. In the final, in San Lorenzo de El Escorial, Short defeated Dutchman Jan Timman (+5−3=5) to earn the right to meet defending World Champion Garry Kasparov.

According to Short and Kasparov, the head of the chess world’s governing body FIDE, Florencio Campomanes, in breach of FIDE rules, decided the location of the match (Manchester) and the prize fund without consulting them. In her book Nigel Short: Quest for the Crown (Cadogan 1993), the British WIM and author Cathy Forbes wrote that at no time in the 1993 bidding process did FIDE actually receive a conforming world championship match bid. In response, Short and Kasparov promptly formed a rival organisation, the Professional Chess Association. The resulting match—sponsored by The Times newspaper—was held under the new body’s auspices in London from September to October 1993. Kasparov won convincingly (+6−1=13) – the largest margin of victory in a world title contest since Botvinnik defeated Tal in 1961. Short’s play was criticised by BBC commentators Bill Hartston and Tony Miles.

Short has written chess columns and book reviews for the British newspapers The Sunday Times, The Daily Telegraph, the Daily Mail and The Spectator. He wrote for The Sunday Telegraph for a decade and for The Guardian between 2005 and 19 October 2006. He reported on the FIDE World Chess Championship 2005 in San Luis, Argentina, for the ChessBase website. He began a new column, “Short Stories”, for New in Chess magazine in January 2011. During the World Chess Championship 2013 he wrote a series of articles for The Indian Express. In 2014 he began writing a column for the Financial Times, interviewing Sol Campbell in the first article.

He has individually coached young prodigies Pendyala Harikrishna, Sergey Karjakin, David Howell and Parimarjan Negi. He worked as national coach of the Islamic Republic of Iran from 2006 to 2007. His first assignment led to their unexpectedly capturing a team bronze medal at the Asian Games in Doha, Qatar, in 2006. In the nine chess events at the Asian Indoor Games in Macau 2007, Iran took a silver and two bronze medals.

Short was made an honorary Fellow of the then Bolton Institute of Higher Education in 1993 and was admitted to the honorary degree of Doctor of Science by the University of Bolton in 2010. In 1999 he was appointed MBE, in recognition of his chess accomplishments. In August 2005, he was unanimously elected secretary general of the Commonwealth Chess Association. He became its president in June 2006, stepping down in January 2008. He has been the FIDE delegate to the ECF since 2009.

During important chess events in recent years, Short is often engaged for commentary as part of live broadcasts on the Internet. Chess historian Edward Winter has named him one of the top five Internet broadcasters.