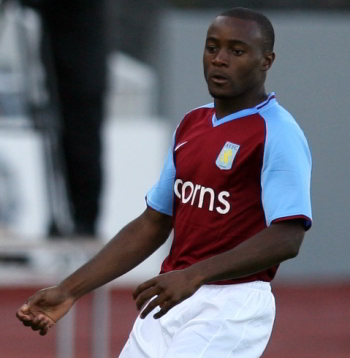 Nigel Shola Andre Reo-Coker (born 14 May 1984) is an English footballer who most recently played for Montreal Impact in Major League Soccer. He came through the youth team ranks at Wimbledon, and has previously played for West Ham United, Aston Villa, Bolton Wanderers, Ipswich Town, Vancouver Whitecaps FC and Chivas USA.

Reo-Coker was born in Sierra Leone. As a child, he spent six years in the country, where his father, Ransford, was a doctor. Nigel moved back to London with his mother Agnes-Lucinda and sisters Natalie and Vanessa when his parents split up in 1990. As a child he attended Riddlesdown High School in Purley

Reo-Coker was first selected for the England U-21 squad against Turkey in October 2003. On 24 March 2007, Reo-Coker led out England Under 21s against Italy Under 21s, becoming the first Englishman to captain a side at the new Wembley Stadium. The match finished 3–3.

In May 2006, Reo-Coker was named as the standby midfield player for England’s 2006 World Cup squad. However, on 22 May the FA announced that Reo-Coker would be replaced by Phil Neville as Reo-Coker’s back problems made him unable to compete in the World Cup.

He captained the England U21s throughout the 2007 UEFA Under-21 Championship. A second booking in the tournament received needlessly in the semi-final against the hosts, the Netherlands, meant he would have missed the final if England had progressed. Due to his age, it also meant that the match would be his final game for the team. The semi-final went to penalties and the Netherlands eventually won 13–12, with Reo-Coker’s penalty being saved in the shootout.

Reo-Coker is of Sierra Leonean descent and has stated that he would consider any future call-ups to the West African nation.
In May 2010, Sierra Leone Football Association president Nahim Khadi announced that his interest in inviting Reo-Coker to join up with the Sierra Leone national football team for their 2014 FIFA World Cup qualification campaign. Khadi said that the player’s great “leadership and experience” would be a great asset to the team.
On 20 September 2010, it was revealed that Sierra Leone manager Christian Cole had decided to pencil Reo-Coker in to his squad for the 2012 Africa Cup of Nations qualifying match against South Africa. However, Reo-Coker later rejected the chance to represent the nation, claiming that he wished to concentrate on his football at Aston Villa and maybe even return to the England set-up in the future.