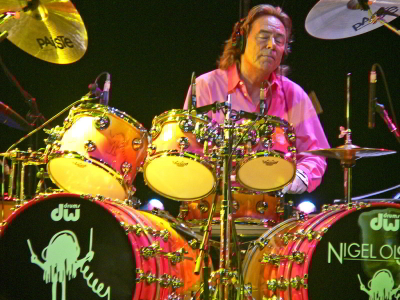 Nigel Olsson (born 10 February 1949) is an English rock drummer, and singer best known for his long-time affiliation with Elton John.

A dynamic drummer and backing vocalist, Olsson helped establish the Elton John sound as a member of John’s original power trio alongside bassist Dee Murray. When not working with John, Olsson has taken up the role of a session musician. Olsson has composed, recorded, and produced albums for his own solo career.

Olsson was born in Wallasey, Cheshire, England, the second of five boys of John and Elsa Olsson. He began his musical career playing the guitar in small bands, and took up the drums at a gig where the drummer did not show up. His first appearance on a record album was in the band Plastic Penny, which released Two Sides of a Penny on Page One Records in 1968. Olsson was spotlighted on one song on that album, “I Want You,” performing both lead vocals and a drum solo.

In 1969 he played drums on the “flower power” pop single “Mr. Boyd” b/w “Imagine” by Argosy, a one-off group which also included Reginald Dwight (later known as Elton John), Caleb Quaye, and Roger Hodgson. Olsson also served a brief time with the English hard rock band Uriah Heep, playing drums on one song on their 1970 debut LP, Very ‘eavy… Very ‘umble. Subsequently, he played drums on one track on Elton John’s debut album, Empty Sky, and then became a member of The Spencer Davis Group with bassist Dee Murray. The pair joined John on the road as his touring band, and played with John during his debut tour in the United States at the Troubadour Club on 25 August 1970.

Only permitted at first to play on one track of John’s studio albums, Olsson and Murray were added, along with guitarist Davey Johnstone, who was newest to the band, and all teamed up to play and sing backing vocals on Elton John’s early 1970s albums.

Olsson has two children: Justin, who lives with his wife Angela in Los Angeles, and Annette, who lives with her husband Barry and children Ashley and Katie in England. „” He married Schanda Butler in 1989 and resides in Los Angeles.
Olsson is a longtime car and racing fanatic, and has been associated with VARA and HMSA as both a racecar driver and a pace car driver.

Olsson endorses DW drums, pedals & hardware, Paiste cymbals, Remo drumheads and Vic Firth drumsticks. He frequently wears headphones and gloves onstage – according to the FAQ on his official website, the reasons he wears gloves is to protect his hands from splinters and calluses, to maintain a better grip on his sticks, and “because they’re flash”.