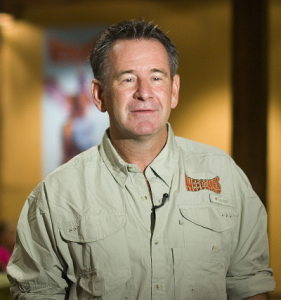 Nigel Marven (b. Barnet, London, 27 November 1960) is a British wildlife TV presenter, television producer, author and birdwatcher. He ran the 2008 London marathon in 4 hours 4 minutes to try to raise £20,000 for the Whale and Dolphin Conservation Society UK.

Marven was born in Barnet but grew up in St. Albans. As a child he loved animals. His first pet was a hamster called Hummy. He kept stick insects, boa constrictors and even an eel in a bath. When he was 15, he got young spectacled caiman too. He studied botany at Bristol University until the age of 22 when he left to begin his career at the BBC Natural History Unit in Bristol. Over the following years he worked firstly as a wildlife documentary researcher for such programmes as The First Eden and My Family and Other Animals, then went on to produce such series as Realms of the Russian Bear. He enjoyed a 12-year professional collaboration with David Attenborough whom he holds in high esteem. In 1998, he moved to ITV where he was asked to present wildlife documentaries as well as producing them.

He is known for his unorthodox, spontaneous, and daring style of presenting wildlife documentaries as well as for including factual knowledge in the proceedings. This has led some people to compare him to Steve Irwin. In his first television series for ITV, Giants, he swam with a great white shark without the protection of a cage. Other scenes included a goliath birdeater spider, arguably the largest spider in the world, walking over his face, and Marven grappling a fifteen-foot African rock python deep in its underground lair. This style of presenting has won him many viewers and to date he has presented more than 30 wildlife programs and series for TV.

In 2002 the Impossible Pictures production company asked him to present the Walking with Dinosaurs episodes Chased by Dinosaurs: The Giant Claw & Land Of Giants, and Sea Monsters. He then moved on to Prehistoric Park on ITV, a fictional series about travelling back in time to rescue examples of extinct creatures such as a Tyrannosaurus, Woolly Mammoth, Arthropleura and others. 2009 saw Marven feature in season 3, episode 4 of hit action drama Primeval, where he is seen playing with a baby Velociraptor before encountering a Giganotosaurus, which, it is implied, eats him off-screen. Both of these series were also made by Impossible Pictures.

In 2003, he founded his own independent company Image Impact, and started making his own wildlife films, including a few one-hour specials and then series, such as Penguin Safari and Panda Adventure. His recent series include Untamed China, Wild Colombia, Whale Adventure and Nigel Marven’s Cruise Ship Adventures which was broadcast in May and June 2015 on Watch. His currently airing series is called Ten Deadliest Snakes, and was first broadcast on Animal Planet in the US in spring 2014 and on Eden in the UK in June of the same year. Second season of the show premiered in autumn 2015. Highlights of the series included, among others, visiting sea krait caves in South China Sea.

During the summer of 2014, Eden Channel in the UK started a new competition for aspiring wildlife filmmakers called Eden Shorts. The task was to make one-minute videos with animals, the best ones to be shown on TV. Nigel Marven, along with Michaela Strachan, was a judge, and has also made some short how-to-guides, available through Eden Channel’s website. In May 2015, Eden premiered a film called Eden Shorts: From Lens to Screen presented by Marven. In the show, he meets competition finalists and reveals techniques used to shoot their videos.