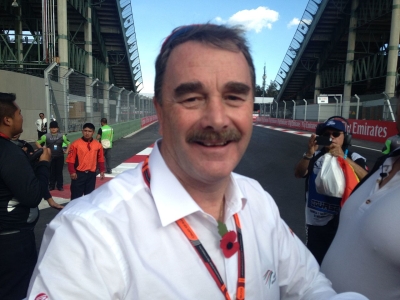 Nigel Ernest James Mansell, CBE (/ˈmænsəl/; born 8 August 1953) is a British former racing driver who won both the Formula One World Championship (1992) and the CART Indy Car World Series (1993). Mansell was the reigning F1 champion when he moved over to CART, becoming the first person to win the CART title in his debut season, and making him the only person to hold both the World Drivers Championship and the American open-wheel National Championship simultaneously.

His career in Formula One spanned 15 seasons, with his final two full seasons of top-level racing being spent in the CART series. Mansell is the second most successful British Formula One driver of all time in terms of race wins with 31 victories, and is seventh overall on the Formula One race winners list behind Michael Schumacher, Alain Prost, Lewis Hamilton, Sebastian Vettel, Ayrton Senna and Fernando Alonso. He held the record for the most number of poles set in a single season, which was broken in 2011 by Sebastian Vettel. He was rated in the top 10 Formula One drivers of all time by longtime Formula One commentator Murray Walker. In 2008, ESPN.com ranked him 24th on their “Top 25 Drivers of All Time” list. He was also ranked No. 9 of the 50 greatest F1 drivers of all time by the Times Online on a list that also included such drivers as Prost, Senna, Jackie Stewart and Jim Clark.

Mansell raced in the Grand Prix Masters series in 2005, and won the championship title. He later signed a one-off race deal for the Scuderia Ecosse GT race team to drive their number 63 Ferrari F430 GT2 car at Silverstone on 6 May 2007. He has since competed in additional sports car races with his sons Leo and Greg, including the 2010 24 Hours of Le Mans.

Mansell was inducted to the International Motorsports Hall of Fame in 2005. He is the current president of one of the UK’s largest Youth Work Charities, UK Youth. He is also President of the IAM (Institute of Advanced Motorists). In September 2014, it was announced that Mansell would be opening a Mitsubishi franchise on Jersey later in the month. In September 2015 the organisers of the Mexican Grand Prix (which was returning to Formula One after a 23-year absence) announced that the final corner of the re-designed Autodromo Hermanos Rodriguez circuit would be named after the 1992 Formula One World Champion and winner of the final race at the Mexico City circuit before it was dropped from the Formula One calendar for the 1993 season.