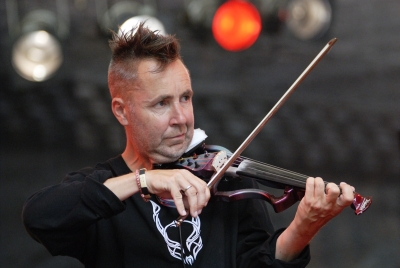 Nigel Kennedy (born 28 December 1956) is a British violinist and violist. He made his early career in the classical field, and has more recently performed in jazz, klezmer and other music genres.

Nigel Kennedy was born in Brighton, Sussex. A boy prodigy, as a ten-year-old he would pick out Fats Waller tunes on the piano after hearing his stepfather’s jazz records. At the age of seven, he became a pupil at the Yehudi Menuhin School of Music. He later studied at the Juilliard School in New York City with Dorothy DeLay.

At the age of 16, Kennedy was invited by leading jazz violinist Stéphane Grappelli to appear with him at New York’s Carnegie Hall. He made his recording debut in 1984 with Elgar’s Violin Concerto. His subsequent recording of Vivaldi’s The Four Seasons with the English Chamber Orchestra in 1989 sold over two million copies and earned a place as one of the best-selling classical recordings ever. The album remained at the top of the UK classical charts for over a year, with total sales of over three million units.

Kennedy published his autobiography, Always Playing, in 1991. He then withdrew completely from public performance, at which point he made the album Music in Colours with Stephen Duffy. He returned to the international concert platform five years later. In 1997, he received an award for Outstanding Contribution to British Music at the BRIT Awards, and in 2001 received the ‘Male Artist of the Year’ award.

In other music genres, Kennedy recorded a cover of Jimi Hendrix’s “Fire” for the 1993 album Stone Free: A Tribute to Jimi Hendrix. In 1999, Sony Classical released The Kennedy Experience, which featured improvisational recordings based on Hendrix compositions. In 2000, he recorded Riders on the Storm: The Doors Concerto (with Jaz Coleman), a violin-based orchestral version of Doors songs, including “Strange Days”, “LA Woman”, “The End”, and “Riders on the Storm”. On 27 November 2000, Kennedy joined rock group The Who at the Royal Albert Hall to play the violin solo in the song “Baba O’Riley”, released three years later on the album Live at the Royal Albert Hall. Kennedy also played on several tracks – notably “Experiment IV” – by British singer/songwriter Kate Bush, who was a guest on Kennedy’s episode of This Is Your Life. He was featured on two of Sarah Brightman’s songs for her 2003 album Harem. He has explored Klezmer music with the Polish jazz band Kroke. In late 2005, Kennedy recorded his first album for the jazz label Blue Note Sessions, with Ron Carter on double bass, Jack DeJohnette on drums and saxophonist Joe Lovano.

Kennedy returned to the 2008 Proms after an absence of 21 years, performing Elgar’s Violin Concerto and a late-night Prom with the Nigel Kennedy Quintet.

He also plays the viola, and has recorded Sir William Walton’s Viola Concerto.

In 1991, he was awarded an honorary degree (Doctor of Letters, or Litt.D.) by the University of Bath.