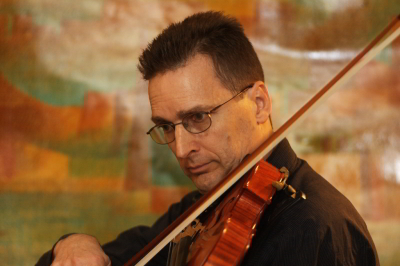 Nigel Keay (born 1955) is a New Zealand composer. He has been a freelance musician since 1983 working as a composer, violist, and violin teacher. Nigel Keay has held the following composer residencies: Mozart Fellowship, University of Otago 1986 and 1987, Nelson School of Music 1988 and 89, Auckland Philharmonia Orchestra 1995.

Keay was born in Palmerston North. Between 1983 and 1995 he received several grants from the Arts Council of New Zealand for various commissions, one of them being a one-act opera At the Hawk’s Well 1. His music, which ranges from solo and chamber music combinations to full symphony orchestra, has sometimes been driven by literary and philosophical ideas. Throughout his career he has wherever possible played in or directed his own works. He became an Associate-Violist with the Auckland Philharmonia Orchestra in 1994.

Nigel Keay moved to France in 1998 (he acquired French citizenship in 2000) and lives now in Paris where he continues to work as a freelance composer and violist. In 2001 his Viola Concerto 2 was performed at the 29th International Viola Congress in Wellington by the Chamber Orchestra of the New Zealand Symphony Orchestra conducted by Marc Taddei with Franck Chevalier as viola soloist. In 2002 he was commissioned by Radio France to compose a work for multiple broadcasts on its France Musiques and France Culture stations (Tango Suite 3). The pianist Jeffrey Grice performed his work for solo piano, the dancer leads the procession4, at Salle Gaveau, Paris in February 2007. Between 2003 and 2005 he gave multiple performances of his String Quartet No.2 in Paris and Bavaria with his own group, Quatuor Aphanès.

In 2006 Nigel Keay created the Ensemble de l’APEIM 6 with the conductor and pianist Elizabeth Askren.