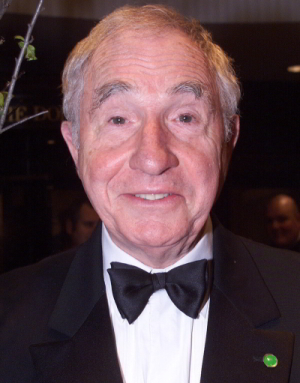 Sir Nigel Barnard Hawthorne CBE (5 April 1929 – 26 December 2001) was an English actor. He portrayed Sir Humphrey Appleby, the Permanent Secretary in the 1980s sitcom Yes Minister and the Cabinet Secretary in its sequel, Yes, Prime Minister. For this role, he won four BAFTA TV Awards for Best Light Entertainment Performance. He won the BAFTA Award for Best Actor in a Leading Role and was nominated for the Academy Award for Best Actor for portraying King George III in The Madness of King George (1994). He later won the BAFTA TV Award for Best Actor, for the 1996 miniseries The Fragile Heart. He was also an Olivier Award and Tony Award winner for his work in the theatre.

Hawthorne was born in Coventry, Warwickshire, England, the son of Agnes Rosemary (née Rice) and Charles Barnard Hawthorne, a physician.[1] When Nigel was three years old, the family moved to Cape Town, South Africa, where his father had bought a practice. Initially they lived in the Gardens and then moved to a newly built house near Camps Bay.[2] He was educated at St George’s Grammar School, Cape Town and, when the family moved, the now defunct Christian Brothers College,[3] where he played on the rugby team.[4] He described his time at the latter as not being a particularly happy experience.[2] He enrolled at the University of Cape Town but withdrew and returned to the United Kingdom in the 1950s to pursue a career in acting.[3]

Hawthorne made his professional stage debut in 1950, playing Archie Fellows in a Cape Town production of The Shop at Sly Corner.[3] He made his Broadway debut in 1974 in As You Like It. He returned to the New York stage in 1990 in Shadowlands and won the 1991 Tony Award for Best Actor in a Play.

In a long and varied career, which began with an advert for Mackeson Stout and a bit part in Dad’s Army, his most famous roles were as Sir Humphrey Appleby, the Permanent Secretary of the fictional Department of Administrative Affairs in the television series Yes Minister (and Cabinet Secretary in its sequel, Yes, Prime Minister), for which he won four BAFTA awards during the 1980s, and as King George III in Alan Bennett’s stage play The Madness of George III (for which he won a Best Actor Olivier Award) and the film version entitled The Madness of King George, for which he received an Academy Award nomination for Best Actor and won the BAFTA Film Award for Best Actor. He won a sixth BAFTA for the 1996 TV mini-series The Fragile Heart.

Hawthorne was also a voice actor, and lent his voice to two Disney films: in 1985, Fflewddur Fflam in The Black Cauldron; and in 1999, Professor Porter in Tarzan.