Nigel is a support 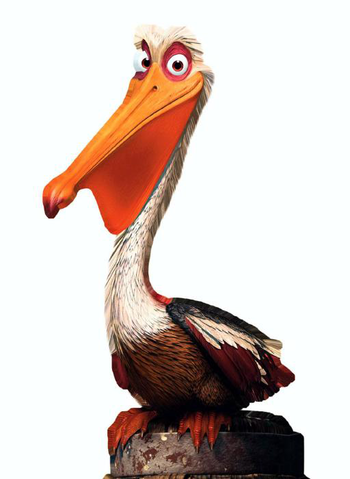 ing character in Finding Nemo. He is a brown pelican who loves to spend hours in the dentist office window, diagnosing dental problems with his fish friends in the tank.

Nigel was friends with the Tank Gang, and also met Nemo after he ended up joining them (due to being taken from his habitat by the dentist). However, he is usually driven out by the dentist shortly thereafter. Nigel later told Nemo about his dad Marlin’s attempt to find Nemo after hearing it from his pelican friends, which gave Nemo a new drive at sabotaging the filter. He is also annoyed by the Seagulls.

Nigel eventually meets Marlin and his partner Dory when they end up nearly being eaten by his friend Gerald, and after discovering who they were, he quickly makes Gerald spit out Marlin and Dory. He tries to explain to them that he knows Nemo, but they attempt to flee as they weren’t willing to be eaten by him. However, Nigel helps Marlin and Dory escape certain death by the Seagulls and brings them to the dentist’s office. When he, Marlin and Dory think that Nemo is dead, Nigel takes them to a nearby buoy, puts Dory and Marlin back into the water, and leaves saying, “I’m so sorry. Truly, I am.”

Nigel is last seen in the ending credits (apparently after learning Nemo is alive after all).

Watch a video about Nigel here: