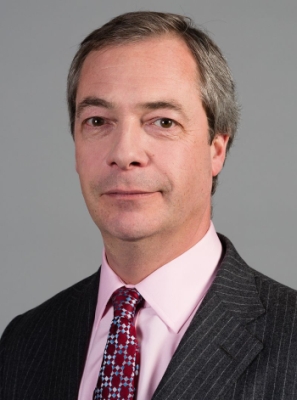 Nigel Paul Farage (/ˈfærɑːʒ/;[4] born 3 April 1964) is a British politician and former commodities broker who, since its formation in 2019, has been serving as Leader of the Brexit Party and since 1999 has served as Member of the European Parliament for the South East England constituency. Outside of his Brexit Party and MEP duties, he also serves as a Vice-Chairman of the pro-Brexit organisation Leave Means Leave, and is the host of The Nigel Farage Show, a self-titled live radio phone-in on the Global-owned station LBC.

He is best known as the former Leader of the UK Independence Party (UKIP) from 2006 to 2009 and again from 2010 to 2016.[5] He co-chairs the Europe of Freedom and Direct Democracy (formerly “Europe of Freedom and Democracy”) group.[6] Known as a long-time prominent Eurosceptic in the UK since the early 1990s, he has been noted for his European Parliament speeches,[7][8] and a vocal critic of the euro currency.

In September 2006, Farage became the UKIP Leader and led the party through the 2009 European Parliament Election, when it won the second highest share of the popular vote, defeating Labour and the Liberal Democrats with over two million votes. He stepped down in November 2009 to concentrate on contesting Buckingham, the constituency of the Speaker, John Bercow, at the 2010 general election, coming third. In November 2010, Farage successfully stood in the 2010 UKIP leadership contest, following the resignation of Lord Pearson of Rannoch. Farage announced his resignation as leader when he did not win the South Thanet seat in Kent at the 2015 general election, but his resignation was rejected and he remained in his post. In 2016, Farage was a prominent supporter of the successful campaign for a vote in favour of leaving the EU in the UK EU membership referendum.

On 4 July 2016, Farage again announced his resignation as leader of UKIP, triggering a leadership election. Writing in The Spectator, after this resignation when it was thought he was leaving politics, the journalist Rod Liddle described Farage as: “The most important British politician of the last decade and the most successful. His resignation leaves a hole in our political system. With enormous intelligence and chutzpah and a refreshingly unorthodox approach, he built UKIP up from nothing to become established as our third largest party and succeeded in his overriding ambition – to see the UK vote to leave the European Union.”

Farage was ranked second in The Daily Telegraph’s Top 100 most influential right-wingers poll in October 2013, behind Prime Minister David Cameron. He was also named “Briton of the Year” by The Times in 2014. Following the resignation of Diane James, Farage became interim leader on 5 October 2016.

In 2017, Farage began contributing to the American television network Fox News. In 2018, Farage joined Leave Means Leave. On 4 December 2018, Farage announced his resignation from UKIP over the appointment of Tommy Robinson as an adviser to the UKIP leader Gerard Batten and the decision of the National Executive of UKIP to keep Batten as leader of the party. On 13 February 2019, Farage confirmed on his Twitter account that he would now sit as a member of the Brexit Party in the European Parliament. On 22 March 2019, Farage was officially announced as the new Leader of the Brexit Party after Catherine Blaiklock’s resignation.