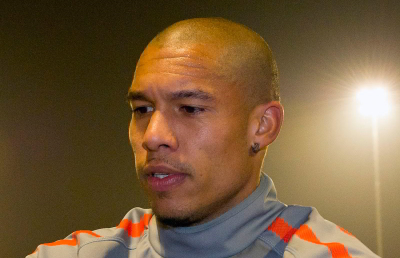 Nigel de Jong (Dutch pronunciation: [ˈnɑjdʒəl də ˈjɔŋ]; born 30 November 1984) is a Dutch professional footballer who plays as a defensive midfielder for Turkish club Galatasaray and the Netherlands national team. He joined the Ajax youth academy as a youngster and worked his way through the ranks to make the first team at age 17. Two years later, in 2004, he made his international debut. Additionally, in 2010 he won a World Cup runners-up medal.

De Jong moved on from Ajax in 2006 to join Hamburg in search of first team football and then moved to Manchester City in January 2009 for an estimated £18 million, where he became an important part of City’s holding midfield. A tireless grafter, he has garnered a reputation of being a combative and feisty player in his performances, a reputation that has earned him nicknames such as “The Destroyer” and “Lawnmower”. He moved to Italian side Milan in August 2012 where he spent three and half years, before moving to LA Galaxy in February 2016.

De Jong began his career as a creative midfielder or forward. At Ajax he played a number of positions, including central midfield and right wing. De Jong credits his conversion to a defensive-minded player to Huub Stevens, under whom he played at Hamburg. His new approach earned him the nickname “der Rasenmäher” (“the Lawnmower”). De Jong is typically the most defensively oriented midfielder in his team. When his team’s defenders are in possession of the ball, De Jong will often drop back towards them to receive it. Sometimes De Jong is the sole holding midfielder, but often he plays alongside another defensive player, such as Gareth Barry at Manchester City or Mark van Bommel for the Dutch national team. De Jong had the highest passing completion percentage in the Premier League in the 2010–11 season out of the top 50 players (90%).

During an international friendly on 3 March 2010, De Jong fractured the leg of Bolton Wanderers’ American international Stuart Holden as the result of a late challenge. In the 2010 FIFA World Cup Final he kicked Spanish player Xabi Alonso in the chest, a challenge for which De Jong admitted he was lucky not to have received a red card. On 3 October 2010, in a Premier League match against Newcastle United, a tackle by De Jong on Hatem Ben Arfa resulted in the latter being carried off the pitch with a double fracture of his left tibia and fibula. De Jong was later dropped from the Dutch national team for an unspecified period of time, but has since been reprieved. In April 2016 while playing for the LA Galaxy De Jong was involved in another controversial incident when a strong takedown led to Portland Timbers midfielder Darlington Nagbe being removed from the field with an injury. The tackle led to a 3-game suspension for De Jong after the disciplinary committee determined the action to have been, “a clear and unequivocal red card.” De Jong however has never been shown a red card during his time at Manchester City. To date the only red card De Jong has been shown in his professional career was a sending off for two bookable offences in a match for Hamburg against Rapid Bucharest in the 2005–06 edition of the UEFA Cup.

In December 2013, Spanish football website El Gol Digital ranked De Jong tenth in its list of the world’s dirtiest footballers. This style of play earned him a title as the most violent footballer in the world, according to French newspaper L’Équipe.

De Jong is of Surinamese-Dutch descent; Surinamese parentage from his father and dutch from his mother. De Jong is married to Winonah, with whom he has two children. His father is former Dutch international Jerry de Jong. He owns a specialist car dealership operating in Europe and the Middle East.