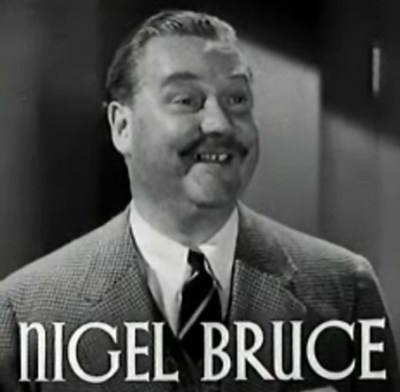 William Nigel Ernle Bruce (4 February 1895 – 8 October 1953) was a British character actor on stage and screen. He was best known for his portrayal of Dr. Watson in a series of films and in the radio series The New Adventures of Sherlock Holmes (starring Basil Rathbone as Sherlock Holmes). Bruce is also remembered for his roles in the Alfred Hitchcock films Rebecca and Suspicion.

Bruce was the second son of Sir William Waller Bruce, 10th Baronet (1856–1912) and his wife Angelica Lady Bruce (died 1917), daughter of General George Selby, Royal Artillery. Bruce was born in Ensenada, Baja California, Mexico, while his parents were on holiday there. His older brother was the author and adventurer Sir Michael Bruce. He was educated at the Grange, Stevenage and at Abingdon School, Oxfordshire. He served in France from 1914 as a lieutenant in the 10th Service Battalion of the Somerset Light Infantry and the Honourable Artillery Company, but was severely wounded at Cambrai the following year, with eleven bullets in his left leg, and spent most of the remainder of the war in a wheelchair.

He made his first appearance on stage on 12 May 1920 at the Comedy Theatre as a footman in Why Marry?. In October that year, he went to Canada as stage manager to Henry V. Esmond and Eva Moore, also playing “Montague Jordan” in Eliza Comes to Stay; upon returning to England, he toured acting the same part. He appeared constantly onstage thereafter, and eight years later started also working in silent films. In 1934, he moved to Hollywood, later setting up home at 701 North Alpine Drive, Beverly Hills.

Nigel Bruce typically played buffoonish, fuzzy-minded gentlemen. During his film career, he worked in 78 films, including Treasure Island (1934), The Charge of the Light Brigade (1936), Rebecca (1940), and Suspicion (1941).

Bruce participated in two landmark films: Becky Sharp (1935), the first feature film in full Technicolor, and Bwana Devil (1952), the first 3-D feature. He uncharacteristically played a detestable figure in The Rains Came (1939) which became the first film to win an Oscar for special effects.