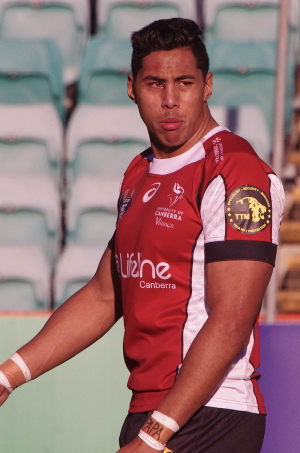 Nigel Ah Wong (born 30 May 1990) is a rugby union footballer who can play either as a loose forward or as an Outside Centre. He currently plays for the Brumbies in Super Rugby.

Ah Wong played for Sunnybank in their inaugural Queensland Premier Rugby Hospital Cup victory in 2011. He played for the Melbourne Rebels on their 2011 European Tour after being selected for the ‘Rebels Rising’ development squad.

In 2012, Ah Wong was a member of the Australian Rugby Union’s National Academy, and was also chosen to represent the Queensland Reds in their exhibition match against the Hurricanes on the Sunshine Coast.

Ah Wong joined the Reds Extended Playing Squad for the 2013 Super Rugby season. He was initially named in the Reds College Squad, but was promoted when Joel Faulkner was forced to withdraw due to personal commitments.

After the 2013 Super Rugby season, Ah Wong was recruited by the Coca-Cola West Red Sparks to play in the Japanese Top League.